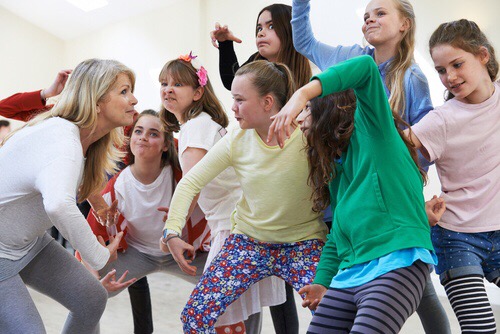 Drama Workshop which deals with the issue of bullying

Main Objective:  To use naturalistic acting techniques to examine the issue of bullying and harassment.

Materials: An empty space and chairs

WALK IT, TALK IT: Mingle around the room, walking and talking in the manner of:

TOUGHS – slouch, swagger, call out across room to mates. Pair up on command: 30 seconds to boast about your latest tough deed.

TIMIDS – scuttle, dart, make little greetings as you pass. Pair up on command: 30 seconds to ask for directions

STARS – saunter or strut, greet your fans, stop to pose for cameras. Pair up on command: 30 seconds to boast about your latest movie or engagement.

SnapShot: Divide into groups of three and each group make a still image of:

• louts hang out on local street

• first day in the new school.

Each group presents to the class.

• What differences in body language did you see in those pictures?

• Were the bodies more open or more closed?

• Where was the focus of that picture?

• How was it made more interesting by use of levels, angles, proximity of one character to another, and so forth?

Pair up. One person brings out a chair and sits on it.

Show a tableau of the bully (standing) demanding money from the other (sitting). Upon instruction, bring the scene to life with a line from the bully, ‘You knowwhat I want – so give it to me!’

Swap roles the tableau is  of the bully lounging on the seat and the other person  arriving to find their seat taken. Upon command, bring the scene to life with the line, ‘Excuse me, but that’s my seat…’

Have all pairs play at once. Freeze them and activate one or two pairs at a time to take lightning looks at their scenes.

Talk about body language of status. Look at how status is conferred.

Replay. Ask for some partnerships to replay the scene, but as characters of equal status.

Discuss what differences you notice in what is done and or said.

What are the bully characters doing with body / voice / choice of language/ positioning o claim status?

What are the victim characters doing with body / voice /choice of language/ positioning to bestow status?

What difference do you see when they are played at equal status?

How do actors create images of status? Point out how role is both created and bestowed by the reactions of others.

When / where do you see this happening in real life?

Each scene is to begin with the others acting as friends gossiping about the weekend. Upon a command the ‘guinea pigs’ arrive into their groups. Four variants are played in the following order (maintain the order to finish on a positive note):

What was it like to be ignored, blamed, welcomed or fussed over?

What emotions do these different responses trigger in real life?

How did each affect the character’s behaviour (voice, body, dialogue)?

If this was real life, rather than make believe, how would these experiences affect someone?

In real life, what are some of the reasons why groups hand out different sorts of treatment?

Making a scene from a story

1. Set groups to prepare an improvisation around the title ‘new kid’. Distribute different tasks to each group

• a new kid is reassured by parents on the first day of school.

2. Allow students time to talk through, cast and try out their scene.

3. Present the scenes to the class.

Using Poetry as a stimulus to explore the issue of bullying

On Monday break they stole my ball

And threw it over the garden wall.

On Tuesday morning, I came in late,

But they were waiting behind the gate.

On Wednesday afternoon, in games,

They threw mud and called me names.

Yesterday, they laughed after the test,

‘cos my marks were lower than the rest.

Today, they trampled my books on the floor

And I was kept in because I swore.

For two whole days they can’t get me.